Margaret Tran came into the world nearly alone. A child of the Vietnam War, her young birth mother gave her up to a stranger in Saigon when Margaret was just a few hours old. Margaret knew nothing of her fraught beginning until age 11, in 1985, when her adoptive mother applied to a program to bring children of the Vietnam War – born to U.S. soldiers – to America.

She has patiently waited for decades to find her birth parents. In July, 2020, Margaret Tran received a notification of a match from the DNA testing company 23andMe. She quickly untangled the family tree over Facebook once connected to DNA matched as her first cousin, and reached out to the three sisters. You can read it here at https://bit.ly/3efXrUO

On August 8, 2020, Margaret had featured in the front page of Frederick News Posts (https://bit.ly/31vSQtb) of finding her newfound family, and on the same day she’s excited to announce the grand opening of her new salon in Whittier – Frederick, MD. The new salon is located at 2401 Whittier Drive Unit D, near the intersection of Christopher Crossings and Yellow Spring Road.

Margaret is a nail artist and also a realtor, author, grief, mindset, and energy healing coach. She has been a guest on numerous radio shows and has been featured in various publications. Her winding path began in Vietnam, where she was a quiet, bullied child. After arriving in Brooklyn, New York at age 11, she had started 6th grade then moved to California a year later, and after graduated high school, she joined the Army, then later began studying Nails at Elegante Beauty College in Mission Viejo, California in 1993 and worked her way around the states from west to east coast.

After Margaret lost her mother in 2012, she fell into a deep depression. An inner healing journey helped her recover so that she could be more present for her family. That growth process also inspired her to become a writer and to guide others seeking to regain a sense of purpose and happiness. She has recently published a book called The ACTIONS, and her project includes empower women through self-healing empowerment the Purse-uing ACTIONS Movement.

Margaret had a lot of ambitions since her childhood, and they kept changing over time. Her ambitions, not just for her writing career, but in life, general are truly simple; all she wants is enhancing the quality of her life, achieving more, commit on working on herself daily, managing her thoughts, and emotions so, she can be the best self that she can possibly be. Therefore, every day, she constantly works on her mindset and strives to learn, grow, share, and contributes as much value as possible to guide, heals, and inspires others.

Even though, she is a mom by trade, a wife by night, and many other trades by passion, but she is always be a NAIL ARTIST at heart. She had worked throughout the state of Maryland, Baltimore, Silver Spring, Lanham, Walkersville and settled in Frederick, Maryland in 2006 with her husband, two children, and four dogs. She is a highly-skilled professional who is fortunate enough to have realized her dream of owning her own salon, after many long days and late nights perfecting the art of doing nails, under someone else’s leadership.

Margaret is the owner of CK Nails in the Whittier Lake Front Shopping Center in Frederick, MD. The new salon features a contemporary atmosphere and a warm and friendly staff that is sure to make your visit a pleasant and memorable experience. Margaret’s vision of CK Nails is more than just manicures. Her goal is to deliver beauty and healing benefits to you from the treatments staff provides.

“At CK Nails, we love what we do and we love who we do it with—and for. We’re full of gratitude for every person who walks through our door, and we see it as the privilege of a lifetime to make our guests feel good about themselves. CK is the right name for us because it stands for CARING and KINDNESS,” Margaret announced. 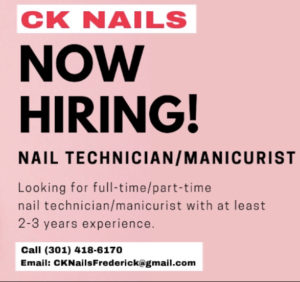 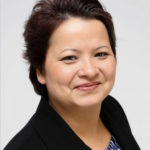 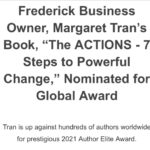 Margaret is up against hundreds of authors worldwide for prestigious 2021 Author Elite Award. She is asking for your support and participating in the popular vote portion of the award evaluation, visit AuthorEliteAwards.com and click the “Vote Now” button. Once there, click through the listing to view the self-help category, then find and click on “The ACTIONS.”

The top ten finalists in each category will be announced on August 24, 2021, and invited to present their book synopsis at an Author Elite Awards Red Carpet Session on October 22, 2021 in Columbus, Ohio. 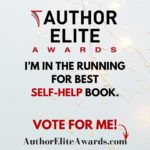 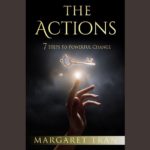 Due to the recent inclement weather we are closed Feb. 1 & 2.